It shall be the duty of the commission to do and perform any and all acts and things deemed necessary and proper to protect the sovereignty of the State of Mississippi, and her sister states, from encroachment thereon by the Federal Government?
Section 5, Mississippi Legislature, 1956. (#134)

White citizens in Mississippi reacted to the Freedom Movement with legislative initiatives, state funded organizations, and private groups all designed to maintain racial inequality and prevent blacks from voting. As the Freedom Movement activists looked to the federal government, beginning with the Brown v. Board of Education case in 1954 that ordered the desegregation of public schools,

whites in Mississippi used the language of state's rights versus the federal government to argue for the continuation of segregation. Many of the initiatives first tried in Mississippi spread to neighboring Southern states.

Created in 1956 by the Mississippi Legislature, the Mississippi State Sovereignty Commission employed the philosophy of state's rights to end the civil rights initiatives of various grass roots organizations as well as those of the federal government. More specifically, the Commission fought to preserve white power and black disenfranchisement which had been a part of the state's history for centuries. Members of the commission included numerous state political figures (such as the governor, attorney general, president of the Senate) as well as citizens who were appointed by the governor. A listing of the members shows that most state officials were members of the organization which directly worked to maintain segregation. (#150)

The Mississippi state legislature not only created the commission, but also appropriated state funds to defray the Commission's expenses.

Therefore, black citizens, through their taxes, were forced to support the Commission that sought to keep them subjugated politically, socially, and economically. The state legislature passed an act specifically allocating $50,000 to the commission for the "biennium ending June 30, 1964."( #153) Thus, all taxpayers (black and white) supported this organization even though it sought to eliminate civil rights activism and maintain segregation in the state and nationwide.

Other states, including Louisiana and Alabama, used the Mississippi State Sovereignty Commission's purpose and format as a model to create similar commissions to fight integration and federal government involvement. Cooperation between the three states became formal networks with the founding of the Southern Association of Investigators in 1966 and the Interstate Sovereignty Commission in 1968.

Although the commission originated under the administration of Governor J.P. Coleman, succeeding governors also used it to support white supremacy. Governor Ross Barnett brought in national speakers to defend racial segregation while Governor Paul Johnson allowed commission director Erle Johnston, Jr. to "build up a secret network of confidants and contacts" who kept him informed of civil rights activity in the state.

Other legal measures taken by the commission to curb civil rights activism included the creation of city ordinances prohibiting protests of any form, determining the lawful use of sidewalks, and the incorporation of the Citizens' Council.

Though the Citizens' Council began in Jackson, Mississippi shortly after the creation of the State Sovereignty Commission in 1956, its rhetoric, which encouraged whites to take back America, spread to other states and chapters were established nationwide. For an example of the philosophy of the Citizens' Council see the flyers published to encourage membership (in the early 1950s) and the advertisement published in Atlantic City during the Democratic Convention in 1964. (#85, #152) The councils held forums and conferences across the nation and published a nationally circulated newspaper. 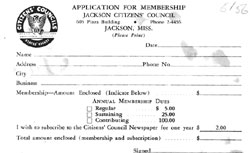 In 1961, William Higgs, a white Mississippi attorney, filed suit on behalf of himself, R.L.T. Smith, and all black citizens and taxpayers of the state against the Citizens' Council and Mississippi State Sovereignty Commission for their unconstitutional and illegal use of state funds. The suit also stated that the "Citizens' Council and Citizens' Council Forum are organized solely for the purpose of advocating and actively assisting in resistance and violation of the 14th Amendment -- as they [blacks] secure equal treatment and facilities." In 1968, the Citizens' Council rebuilt its headquarters in Jackson, MS. As many southern states succumbed to federal mandatory school desegregation measures in the late 60s and early 70s, the Citizens' Council established private council schools for white children, to prevent them from having to attend school with black children.