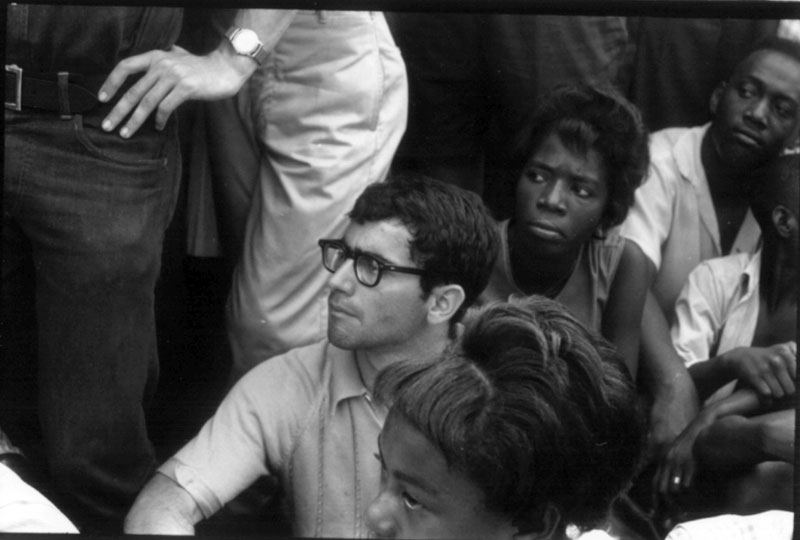 In 1964, the Ford Foundation awarded a grant to Brown University to begin a cooperative program with Tougaloo College in Jackson, MS. At the height of the Civil Rights Movement, the foundation hoped that this new relationship between a wealthy, predominantly white, Ivy League University and a struggling, Historically Black College would increase Tougaloo's academic and financial resources while enriching Brown's academic and social ties with African Americans. The two schools developed a range of programs to allow Brown and Tougaloo students, faculty, and staff to come in contact with one another. But the Student Exchange program, in which Brown and Tougaloo students studied at the other campus for a semester, remained at the heart of the relationship. Although the Student Exchange program first focused on the liberal arts undergraduate curriculum, other student-geared academic programs later developed allowing Tougaloo students the chance to study in Brown's Engineering Department and Medical School. Over the forty years of the Exchange, Brown and Tougaloo students have had a range of different experiences in different time periods.

The Mississippi Freedom Movement of the 1960s was at the forefront of the Civil Rights Movement because Mississippi was one of the last places where segregation and racial inequality had a stronghold. Brown students who studied at Tougaloo during this decade were in for the experience of their lives. Paul Hurburt (Brown, '67), a New England native, had encountered few blacks in his lifetime and could not fathom the concept of segregation. Going to Tougaloo in 1967 allowed him to experience and participate in the Civil Rights Movement firsthand: "As a White, I wanted to share with Blacks my antipathy for such an anti-human system . . . the civil rights movement was personalized for me in several incidents while I was a student . . . I was shocked to see a burning cross [on campus]." Although Hurburt intended to be at Tougaloo solely as a student, he became involved in the Movement by "testing" the integration policy of a local restaurant with fellow Tougaloo students. The time that Hurburt spent at Tougaloo made him realize that, despite his dislike of the America's racially discriminatory environment, he still had to come to terms with some of his own racial prejudices. He learned that "our color is one of the least important things about us . . . I couldn't think of blacks as a mass anymore." (#10167)

Two years after Hurburt participated in the exchange, a Tougaloo student, Rose Parkman Davis (Tougaloo, '68), made the trip to Providence, studying on the Pembroke campus (Brown's affiliated women's college) for a semester. Like Hurburt, Davis had been raised in an environment where she was not a racial minority. However, unlike Hurburt, Davis grew up in the segregated South, where the climate was much warmer and the people more welcoming than in Providence, RI. Despite her unfavorable initial impressions of Brown, Davis enjoyed the "sit-down dinners" and cultural activities, like theaters and museums, available on campus and in the city. Davis "hated the 'mother [dorm mother/counselor]'. . . who was forever trying to split up the blacks and make us 'mingle.' " (#10164) Studying at Brown/Pembroke as part of the exchange gave Davis the chance to see how whites lived. {Brooks Survey, Rose Parkman Davis, 1994} Davis studied at Brown/Pembroke at a time of student social protest and activism. The small number of black students and other students of color caused Brown's black students to hold a campus walk-out (organized by black Pembroke students) in 1968. Like the state of Mississippi, Brown University and the rest of the country were undergoing vast social changes designed to make U.S. society more inclusive.

Tougaloo's social atmosphere was also changing in the late 60s and early 70s as the Civil Rights Movement ended. As African Americans faced little progress on economic equality, the theme of Black Power became very strong nationwide as well as on the Tougaloo campus. When Peter Bernstein (Brown '73) studied at Tougaloo in the fall of 1970, he was not welcomed as previous Brown students had been: "There was a great deal of . . . visible hostility from students . . . somebody yelled out . . . 'Honky, get off this motherfucking campus!' " At a time when blacks became more distrustful of whites, tension developed within the Brown-Tougaloo relationship. Many Tougaloo students felt that the exchange jeopardized Tougaloo's identity as a Historically Black College. Bernstein agreed: "1970 -- It was a difficult time for the relationship and it was a difficult time. For Tougaloo, for white students at Tougaloo, for the whole exchange." (#10178)

Although the Black Power Movement challenged the relationship, and unresolved conflict existed between the Brown and Tougaloo, the exchanged endured through the 1970s and 1980s. In 1989, Justine Underhill (Brown '91), a white student, decided to participate in the exchange because she wanted to explore another culture in the United States, one that differed from her own as a result of race and geography. As a native Californian, Underhill was concerned with adapting to the hot southern climate, more formal code of dress, and being a white student on Tougaloo's predominantly black campus: "It was obvious that I was a fish out of water, and I was uncomfortable." Being on Tougaloo's campus with the South's slower pace of life gave Underhill plenty of time to reflect on her experiences there and realize that racism was still very much present in the lives of black Americans. Initially, it was difficult for Underhill to build a relationship with her black roommate, who was distrustful of Underhill as a result of "experiencing overt racism in the South." However, the two were able to break down barriers over the course of the semester to become close friends, "transcend[ing] the political[ly] correct and truly learn from [one] another." (#10165)

When Kawanda McNeill (Tougaloo '96) arrived at Brown in the spring of 1994, she was determined to broaden her horizons by placing herself in a more racially and culturally diverse environment. As a student from a Historically Black College, McNeill had certain conceptions of the black students at Brown: "I thought the African-American students would have no sense of their heritage or culture. They do." However, just as McNeill had preconceptions of Brown students, she was aware that Brown students had negative ideas about Tougaloo students: "The students at Tougaloo are not academically handicapped in any way." McNeill's experience at Brown was one of differences: where Tougaloo was socially conservative, Brown was socially liberal; where Brown had co-ed dorms, Tougaloo had single sex dorms; where Tougaloo had small classes, Brown had large classes. Despite all of these differences, McNeill credited her semester at Brown as one that gave her a "greater respect for people as individuals." (#10166)

Brown's changing racial demographics, more African American students, have been reflected in the Brown-Tougaloo exchange with more black students than non-black participating in the exchange. Both Brown and Tougaloo have changed many times since 1964, but Brown and Tougaloo students remain willing to place themselves in different environments and be challenged by the similarities and differences between the two campuses. One participant reflected that the regional differences often meant more than the racial differences, while another wanted the experience of being considered a racial minority. Regardless of their reasons for participating in the exchange, the lives of all the students involved were changed significantly because of the program. As one wrote, "I had the rare opportunity to put myself in someone else's shoes, an opportunity that changed my life." (#10165)